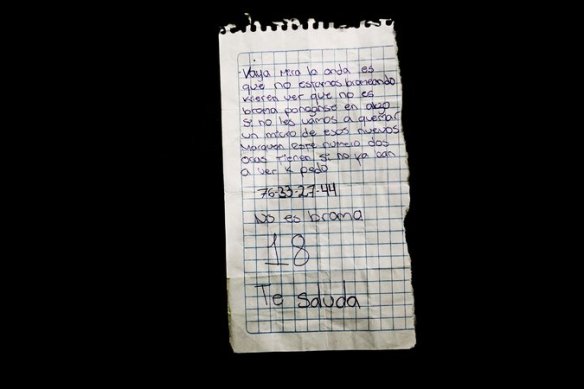 The note above, an extortion note turned over to the police by a bus driver, illustrates the level of “sophistication” utilized by the gangs in order to extort thousands of Salvadorans every week. Extortion is pretty easy to carry out.

Although my book, which relies on data I collected in 2007-8, treats the gangs of northern Central America as relatively comparable across all three nations, I have recently started to emphasize the diverging pathways that the gang situation has taken in each country of the Northern Triangle in the last several years. Whatever the case in the mid-2000s, it is no longer possible to argue that the gangs have similar levels of adherence and control in all three countries. The case of El Salvador is especially sad both for the way successive governments have been mishandling the phenomenon (trying to incarcerate their way out of the problem) and for the way the gangs have utilized mass incarceration to strengthen  their structures and grow their numbers across much of the nation.

For anyone interested in understanding the gang situation in El Salvador, I highly recommend taking about 15 minutes to read an excellent article called Killers on a Shoestring: Inside the Gangs of El Salvador published yesterday (11/20) in the Sunday edition of the Times. The authors are a team of investigative journalists including Oscar and Carlos Martinez from the excellent digital newspaper Elfaro.net. These guys have proven their investigative chops with one article after another of tough-minded investigative reporting and interviews with top gang leaders, as well as pastors, priests, and politicians. In this piece they do an excellent job of digging for hard data on what the Salvadoran government has actually seized in assets compared with what we know (and what has been claimed) about the gangs. The result is an argument that pokes serious holes in the sensationalism surrounding the Salvadoran gangs and their supposedly lucrative international extortion ring. True, gangs like the MS-13 conduct extortion within most of Salvadoran municipalities and they continue to maintain international networks, but in a globally-connected world (in which many Salvadoran families can be said to have “international ties”) that’s not actually saying much. And when you start doing the numbers, even with a claim such as the Salvadoran police finding that in a typical month the MS-13 brings in about $600K in revenues (mostly from extortion and petty drug dealing), if you have 40K members throughout the country, such money doesn’t go very far. Think about it. If the money were divided up evenly — and if the gang had no overhead — it would amount to $15 per member. But of course it’s not divided evenly and the gang has considerable overhead costs relating to weapons acquisition and legal fees. There’s a little left over for family members of incarcerated gang members — but not much. Among other evidence presented by the authors, when the “CEO” of the country’s largest gang is living in a small cinder-block house in a tough neighborhood and has two beat-up cars to his name at the time of his arrest, it tends to cast doubt on the government’s claims regarding gangs’ supposedly million-dollar profit-making machine. Nor are the gangs able to benefit handsomely from the lucrative international drug trade. They are petty dealers with whom the cartels themselves want little if any direct involvement.

Let me hasten to add that none of this refutes or diminishes the actual violence and heartache wreaked by the gangs. They continue to contribute vast amounts of death and even more fear, especially in certain geographic sectors and professions. But this capacity for violence is not made possible by a vast, powerful, and well-funded organizational apparatus — it is possible rather because gang violence, including murder, is actually quite easy to carry out. This is the case because 1) the legal system is already overwhelmed with violent crime cases and stretched very thin as a result, and 2) there exists in El Salvador a great deal of anger, resentment, and a deep thirst for respect and belonging among the vast impoverished communities of the nation. As the authors wisely point out, many of the thousands of “soldiers” in the ES gang are willing to take huge risks on behalf of the gang (and commit murder if necessary) for little or no monetary gain. They are angry, alienated and want some respect. And a great deal of El Salvador’s anti-gang policies over the years have simply deepened this alienation and anger.

Here’s hoping that policymakers in both Washington and San Salvador are reading the work of this journalistic team rather than the many sensationalist accounts produced every month by many other media outlets. If so, they might be able to craft truly effective policies that, little by little, reduce the tension between the government and the gang communities and provide other, far safer pathways to respect for the tens of thousands of impoverished Salvadoran children who will come of age over the next several years. Will the gang be able to continue to make the case that the police have targeted their communities and their families in a continuing war on the poor?